This week’s recipe was another one that Nance found in an old cookbook. I’m all about finding something to do with chicken, though since I hadn’t made this recipe before (and didn’t know if we’d like it), I opted to use chicken from the grocery store rather than our own chicken. Put the milk in one (large-ish) bowl and mix the Parmesan and bread crumbs in another. Then mix the lemon juice, melted butter, and garlic in a small bowl – I used a glass 2-cup measuring cup, because I read ahead and knew I’d be drizzling the lemon juice/butter/garlic over the top of the breaded chicken. Which is not to say that I didn’t slop it all over the place anyway, but I didn’t slop it as MUCH as I would have if I’d used a bowl, so there’s that. The less slopping going on, the better.

Dip the chicken in the milk and then in the bread crumb/Parmesan mixture. Please note that I always do whatever I can to make sure that my fingers don’t touch raw chicken, because it ooks me out. And yes, we have chickens, and YES I touch them with the fangers, but that’s a different situation entirely, so SHADDUP, YOU.

The bread crumbs didn’t want to stick to the chicken, so I basically grabbed up a handful of bread crumbs and kind of mooshed them onto each piece of chicken until there was a decent coating. Then I carefully moved each piece of chicken to the baking sheet. Yes, those chicken breasts are on parchment paper. In 2011, I bought 500 sheets of parchment paper from The Baking Queen. That $32.99 for 5 – 6 years’ worth of parchment was, y’know, a HUGE EXPENSE that I know not everyone can swing, NANCE, but not having to scrub crap off the baking sheets every time I use them was worth having to take out a second mortgage on the house.

Drizzle the lemon juice/butter/garlic on top of the chicken breasts, then sprinkle with Paprika. My big gripe with the original recipe is that it says “bake at 350 degrees covered for 30 minutes. Then uncover and bake an additional minutes.” Well.. HOW MANY additional minutes? Proofreading is your friend, Pressley Ridge (says the woman who never bothers to proofread ANYthing). I ended up baking it for an additional 10 minutes. At that point, the chicken was golden brown and cooked through, so I figured it was good enough. There ought to be a picture of the chicken on a plate, looking all pretty and stuff, but there isn’t. Because I was having a scatter moment and completely forgot to take that picture. Hopefully Nance will do better.

The verdict? Nope, nope, and nope. This chicken didn’t appeal to me at all, in the slightest, not one teeny tiny little bit. Fred didn’t care for it much either, but due to his frugal nature ate the leftover piece for dinner the next day (I would have been happy just to toss it out). I’m not saying that if this chicken were served to me that I’d barf on the plate or anything – I could eat it, and probably wouldn’t even gag while I was doing so – but I wouldn’t be happy to find out that that’s what was for dinner. I wouldn’t request it, and I’m sure as hell not making it again.

Nance’s Take:
[box type=”info”] I’ve been tied-up with work lately so Shirley (aka: Mom) stepped up and made this recipe for me. She also took the pictures. Consider yourselves warned.[/box] 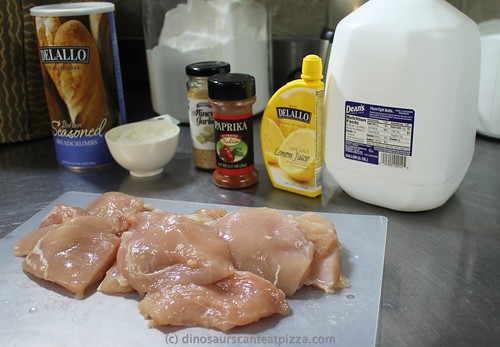 I told my mother three things before she made this recipe.

I went into the living room and proceeded to work while keeping my ears on the kitchen in order to count the swear words.  The amount of swear words I heard would determine the difficulty of this recipe.  We call this Cooking With Love.  I also knew my mother would be sure to tell me all about this recipe if it were a pain in the ass because this family loves to beat a dead horse.

My mother swears like a sailor, but does not say the f-word.  She’s a big fan of dramatically saying Jesus Christ or Goddammit.  But the f-word is a horrible thing that she finds appalling.  You figure it out because I can tell you that her daughter and grandchildren don’t understand.  And no, this does not stop us from throwing around f-bombs.  It does, however, allow us (especially Alex) to riff on her about taking the Lord’s name in vain much to her chagrin and our hilarity. 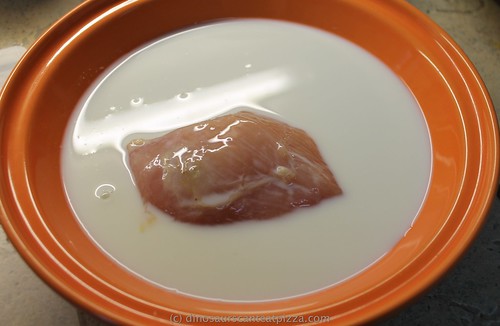 Here’s a lovely picture. I’ve learned not to ask, but it perfectly sums up the relationship between my mother and I. We definitely see things very differently. 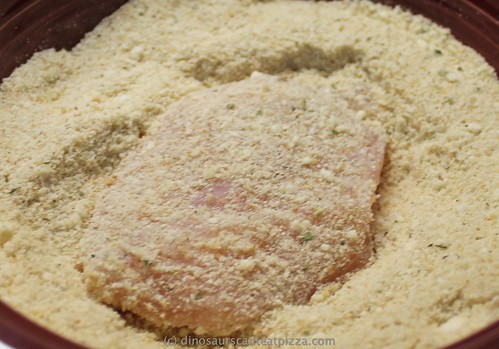 I hadn’t heard any swear words yet, but I did notice that she was bitching at the animals more than usual. My mom is the person that feeds the dogs. She usually stands at the counter, cutting up people food and making sure that everything is equal and fair. The dogs get regular dog food, but Shirley feels they need a little something special (people food) to go with it. I can’t even tell you how many times I’ve watched my mother make the dogs eggs (sometimes with toast) when we didn’t have any leftover meat.

She was bitching because they had her surrounded thinking it was their dinner-time.  Moving back and forth was a huge pain in the ass with them in the way.  Not my problem, Shirley.  You’re the one that spoiled the dogs. 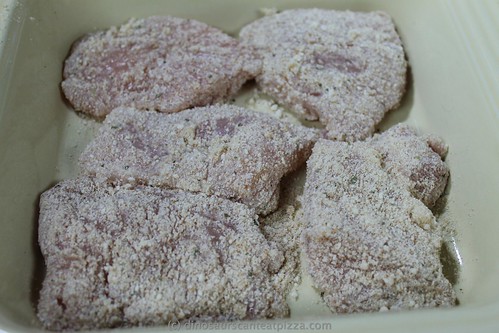 She was probably dying about now because my mom is the one that likes to hurry up and get shit done. I have banned her from the kitchen at times due to her trying to rush me around when I needed to stop and take pictures for DCEP. So yeah, she was probably ready to shit bricks by now. 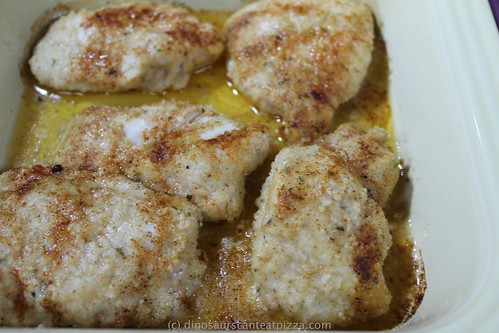 That butter in the bottom of the pan concerned me. And I would have probably left it in the oven longer so the coating would get brown, but she stuck with the recipe and added only enough minutes for the chicken to be baked through. 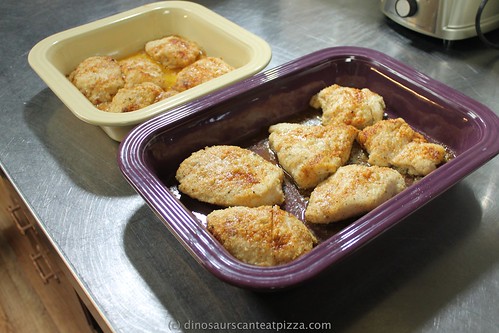 The finished product. Everybody ate it, they said it was okay, but nobody raved about it. This might have been made better by the use of shredded parmesan cheese (hopefully Robyn used it so we can see). My mother said that she ate it cold the next day and it was delicious so she thinks the next time we make it we should do it a day ahead.

The dogs enjoyed the hell out of the leftovers. 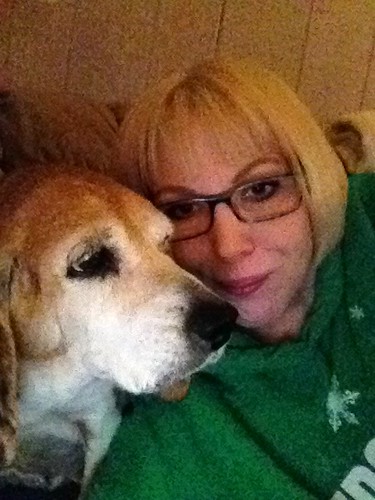 Since she didn’t take any pictures of the animals I leave you with a grainy selfie of me (with my bleach blonde hair which is now back to brown) and The Beagle that I had posted on Facebook a while ago.